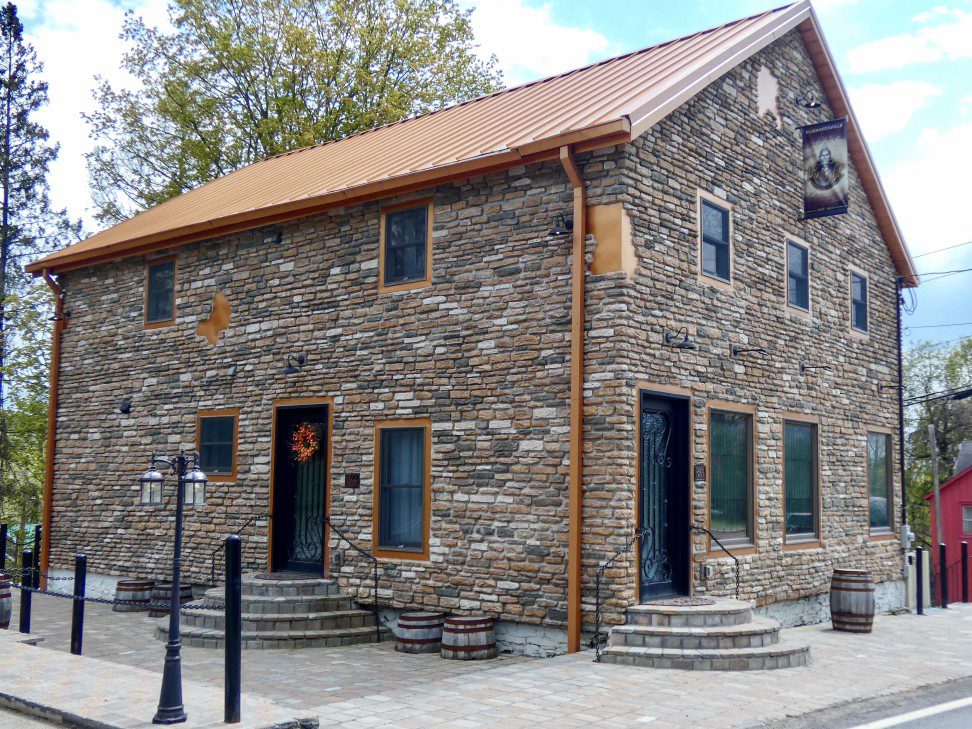 What Happened to The Copper Roof Tiles Replaced in The 1980s? 

Copper is an exceptional metal. Colors range from vivid salmon pink to a more subdued grey-green, and it is both corrosion-resistant and bendable.

A copper roof will last a long time and need very little upkeep. They have a long lifespan of up to a century.

Some of the most renowned civic and institutional structures have long used copper as a distinctive roofing material.

Historically, copper was commonly used in public and institutional structures, but are copper roofs a thing of the past, or are they still popular?

Why Choose A Copper Roof?

Aluminum products are relatively inexpensive today due to prefabrication, whereas copper roofing, which must be handcrafted, is significantly more expensive.

Owners who are not constrained by the mandates of a landmark authority may choose suitability above authenticity because aluminum can be modified to resemble copper’s hue, if not its appearance.

True, the high initial cost of a new copper roof may make it unaffordable, if not undesirable, for a large number of buildings. Adding a roof that may last five times as long to a structure meant to last only 20 or 30 years is a waste of money.

Among today’s ever-changing product types and environmentally friendly design, it’s easy to overlook that one of the most naturally friendly alternatives is also one of the oldest.

Copper sheet roofing has been used since medieval Europe, and the earliest known use of naturally pure copper dates back to the Neolithic period, approximately 8000 B.C., when it was discovered.

The copper roof of Hildesheim’s St. Mary’s Cathedral is thought to date back to the 1300s. American copper mining started in Maryland and New Jersey during the mid-1700s and expanded westward to Michigan and other western states a century later.

The malleability levels of copper make it an ideal material for decorative applications in architecture.

When copper was popular in the late nineteenth century, it was hammered or pressed into ornate moldings, friezes, and ornaments such as weathervanes and finials.

New York City’s Statue of Liberty Enlightening the World is perhaps the most recognizable for massive copper use.

While copper is no longer utilized for decoration because of its exorbitant cost, it remains a valuable resource for preserving and maintaining old structures.

Before the American Revolution, the broad availability of copper roofing sheets was due to its widespread use as a ship hull coating.

The Maryland State House in Annapolis (1772-1793), the Massachusetts statehouse in Boston (1795-1798), and the Old Christ Church in Philadelphia (1795-1798) all had copper roofs that lasted for over a century before being replaced in 1967, all of which had copper roofs for their initial construction in the 1830s.

The pediment of Philadelphia’s First Bank of the United States, built between 1795 and1797, still has the copper roof installed on top of it when it was completed.

A properly designed and expertly fitted copper roof is well worth the initial outlay, given the extraordinary endurance of traditional copper roofs.

Copper’s environmental friendliness isn’t solely due to its endurance. When it comes to energy efficiency, copper is the clear winner. LEED, a green building rating system, now includes data from lifetime assessments (LCAs) in its certification scores, making sense.

LCA is a method for evaluating a product’s long-term environmental impact.

Reusability and recycling are also taken into account in the LCA calculation, in addition to the embodied energy. Like other roofing materials, copper has the advantage of being completely recyclable.

It is possible to recycle copper scrap, architectural copper, and cuts and filings generated during finishing.

This recycled copper is not confined to low-grade materials. Due to its unique qualities, copper has a long lifespan and may be recycled indefinitely without losing any of its beauty, strength, malleability, or corrosion resistance.

Embodiment refers to how much energy a material uses throughout its life cycle, from extraction to processing to production to transportation to installation to disposal.

Compared to other metals, the extraction and processing of copper need a minimal amount of energy. Consider the material’s lifespan when comparing embodied energy.

Single-ply or built-up roofs with a low slope may have lesser embodied energy, but the material’s lifecycle must be considered.

In addition to being visually appealing, copper roofing can add value to a building, whether it is new or old.

Due to copper’s distinctive color and texture, it’s often used for roofing because of the cheap lifetime costs, salvage value, and low maintenance requirements.

It changes from a shiny new penny tint to a dazzling blue-green hue as copper weathers. Copper roofing changes color over time depending on the climate and use, giving each copper-clad roof a distinctive appearance.

As gorgeous as a copper roof may be, it will eventually succumb to the same fate as all other roofs.

Damage to copper is more likely to occur if acidic moisture is in touch with it for an extended time and has a lower pH value.

Tile, slate, asphalt, and wood shingles are not neutralized by acid rain as limestone and granite are. A protective patina may not form on copper flashing or gutters if the rainwater is concentrated and accumulated.

Capillary action can exacerbate corrosion if the leading edge of the roof shingles touches the copper flashing directly.

The deterioration of the copper flashing causes line corrosion. The cant strip should be used to prevent acidic water from seeping through copper flashing.

Since copper is such a delicate metal, it is easily damaged.

Premature failure can be caused by abrasive pressures such as dripping water or hail, foot movement, and other abrasive materials rubbing against the copper.

Negative ions from a more stable metal are deposited on a less sturdy metal when they come into contact, producing corrosion.

Regarding corrosion resistance, copper has a high galvanic index, making it a “noble metal.” When metals with a lower galvanic index, such as aluminum and steel, come into contact with copper in an electrolyte solution, such as saltwater, they begin to corrode.

For copper roofing to work, it needs to be installed over electrolytically compatible materials. A non-absorbent tape or gasket should be used to separate surfaces that cannot be separated if contact between dissimilar metals cannot be avoided.

Wind uplift or constrained expansion and contraction can cause copper to develop flaws, as can repetitive deformation by forces such as wind lift. Initially, these defects may go unnoticed if the deformation occurs within the copper’s elastic range—that is if the copper can return to its previous shape.

When a metal is subjected to hundreds of back and forth bending deformations, it can develop characteristic star-shaped cracks and fractures.

Metal fatigue is especially apparent in places with significant wind uplift and steep curves. Fortunately, all of these causes of early failure can be avoided.

Unfortunately, a copper roof’s lifespan can be drastically shortened due to poor planning, shoddy construction, unsuitable materials, and repairs performed by amateurs.

Historic structures may only be able to be restored or replaced with new copper if they are protected by preservation legislation.

Contact the agency that governs such structures to find out if the roof is subject to historic building standards. Experts should inspect this type of copper roofing to see if it can be saved.

It’s best if damaged sections can be removed and fresh copper of the same weight and temper can be used in place of the old.

All clips and fasteners should be made of electrolytically suitable materials, such as copper, brass, or assured stainless steel alloys, to allow for expansion and contraction.

It may be required to treat the whole structure to guarantee uniform patination when changing segments of a patinated copper roof. Sodium bicarbonate and ammonium oxalate are used to counteract the acidic phosphoric and nitric acids used to treat the copper.

In order to ensure an evenly textured patina, cover the copper with a light layer of carnauba wax after it has been rinsed.

According to the findings from an environmental impact assessment commissioned in 2000, the city of Palo Alto, California, has forbidden the use of copper gutters and roofs on new and prevailing properties.

Since then, a slew of additional states and municipalities have followed suit. The research raised many questions.

There were some concerns about the safety of copper roofs. The copper industry had a problem with these and other issues.

However, further research has cast distrust on the findings of the Palo Alto study. “Overestimated bioavailable copper” may have been the conclusion of a study published in the New Zealand Journal of Marine and Freshwater Research in 2008.

The scientists revealed that the effective copper concentration in waterways is lower than previously thought due to the binding of free copper ions into harmless hydroxide and carbonate complexes.

Once it enters the watershed, copper-toxin-containing runoff from a roof downspout may not be harmful.

EPA, local governments, and the copper industry will continue to update stormwater treatment and copper roofing recommendations based on new findings.

For the time being, architects and engineers must stay up to date on regulations and design following them.

So, is copper a suitable roofing material?

Copper is a beautiful metal for roofing. Despite its resistance to fire, hail, and mildew, this metal is a common building material. Copper roofs may endure up to 50 years with proper repairs and upkeep. For those who want to raise the value of their property, copper roofing is an excellent option.